Prepare to be amazed: The Illusionists at The Aronoff

Last night we found ourselves at a not-your-everyday magic show, The Illusionists. You’re probably familiar with card tricks and pulling rabbits out of hats (though there was a rabbit), but this show is much more than that, with varying personalities to keep the show on an emotional roller coaster.

My boyfriend and I love magic. We’re not the ones you find trying to figure out how they did it; we’re more like the ones in shock and awe, thinking, “Whoa.”

The Illusionists is guaranteed to give you that moment and so much more. 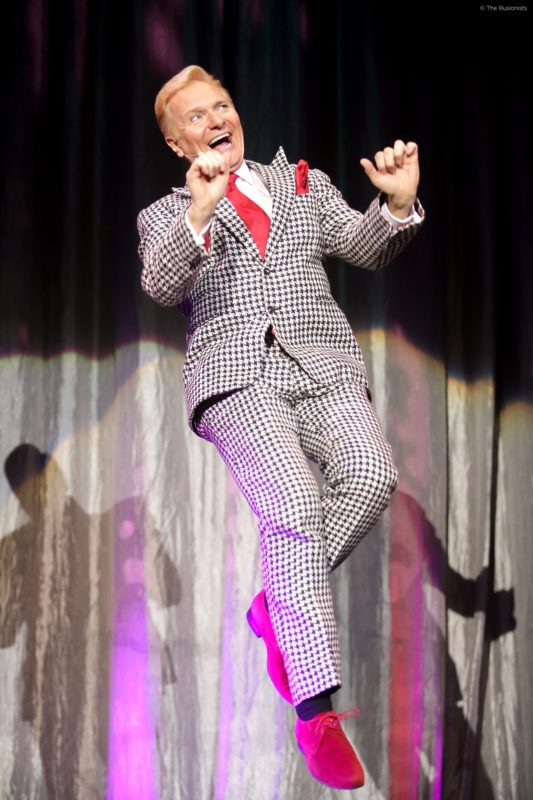 Jeff Hobson, The Trickster / Courtesy of Broadway in Cincinnati

Jeff Hobson, The Trickster, leads the show with comedy and, of course, trickery. The show utilizes the audience, so you might be chosen to go on stage.

After The Trickster, we were introduced to Kevin James, The Inventor. While on stage, The Inventor took parts of a man and put him back together again, bringing him to life. Later he would impress with a magical rose and a flurry of snow. 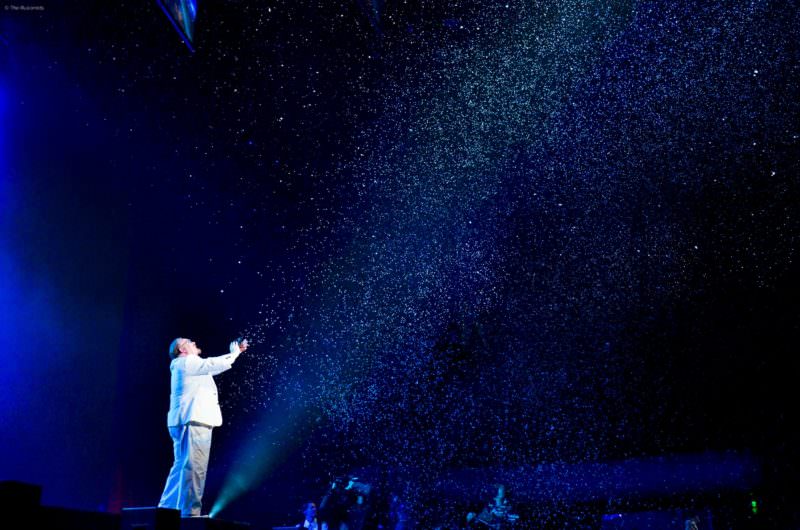 Kevin James, The Inventor / Courtesy of Broadway in Cincinnati

If you’re more into shocking illusions, Dan Sperry, The Anti-Conjuror, will impress you. However, if you’re more on the squeamish side, this would be a good time to bury your face into your partner’s shoulder and hold their hand tightly.

The Anti-Conjuror eats a Lifesaver and brings it back out using only dental floss. Trust me, he doesn’t just get the bits out of his teeth. Other than his shock value, Sperry brings a dry humor to the stage.

“Whoo, magic,” Sperry says, apathetically as he presents a top hat to pull out a rabbit. The Anti-Conjuror mocks the whole idea of stereotypical magic. For your information, he doesn’t just pull the rabbit out – it kind of shoots out. 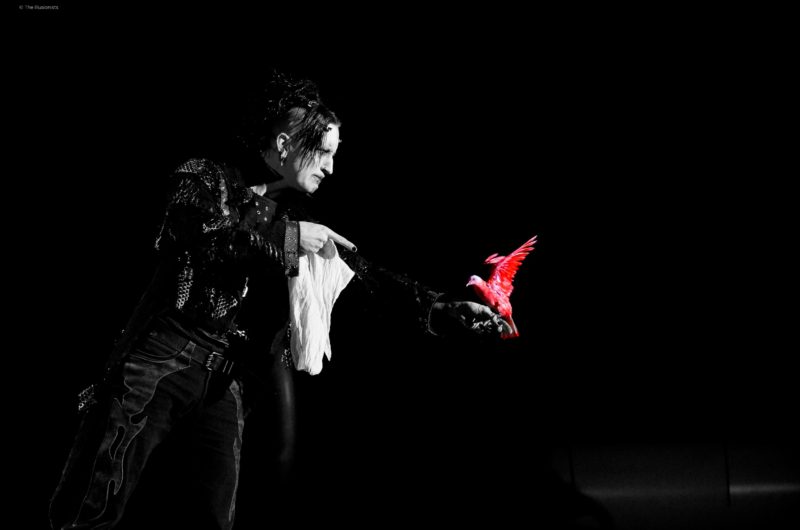 Dan Sperry, The Anti Conjuror / Courtesy of Broadway in Cincinnati

Sperry follows his act with a quarter that disappears inside his body and reappears somewhere else. His last act involves doves, so be sure to watch that one since it’s not as terrifying. Don’t worry, he doesn’t pull an Ozzy Osbourne trick.

After that dip in the roller coaster, you’re brought back up by Colin Cloud, The Deductionist. All right, this man impressed me the most. If you didn’t believe in psychics, Cloud just might make you a believer. 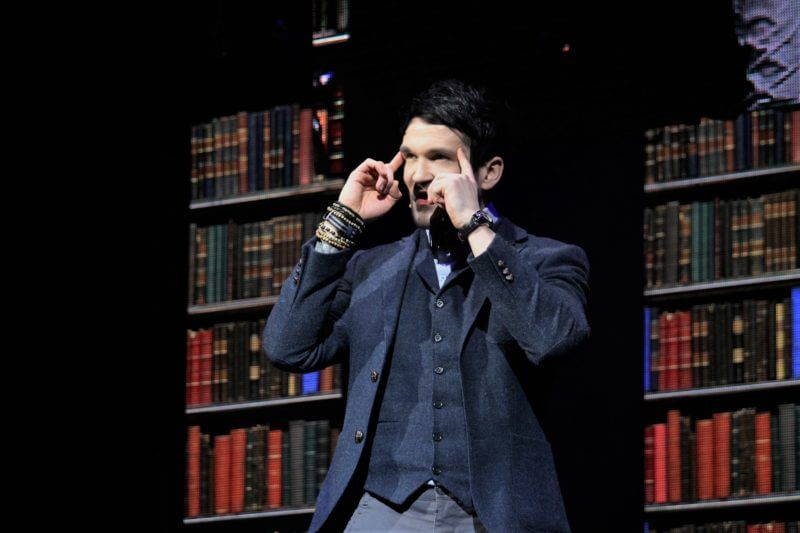 Colin Cloud, The Deductionist / Courtesy of Broadway in Cincinnati

Building off his degree in forensic investigation, Cloud basically can read your mind. Cloud is big on audience participation, so be ready for his tricks. Without giving a lot away, one of his tricks involves looking in the Playbill. You and your date definitely will be in awe of this guy.

For more a theatrical performance, An Ha Lim, The Manipulator, is your guy. Lim can make cards appear and disappear with a flick of his wrist while moving gracefully across the stage. He also is the final act of the show, so please stick around for it!

An Ha Lim, The Manipulator / Courtesy of Broadway in Cincinnati

As an homage to Harry Houdini, Andrew Basso, The Escapologist, performed his famous escape trick from a water tank. If you aren’t familiar with that, he is handcuffed and his feet are locked while he is hung upside down. Basso only can use a paper clip to pick the locks in less than two minutes. You’ll be on the edge of your seat!

Jonathan Goodwin, The Daredevil, also will put you on edge with his amazing crossbow tricks. One of his assistants, Stephanie Potteiger, stands in front of a black box while he shoots at flowers and newspapers she holds. 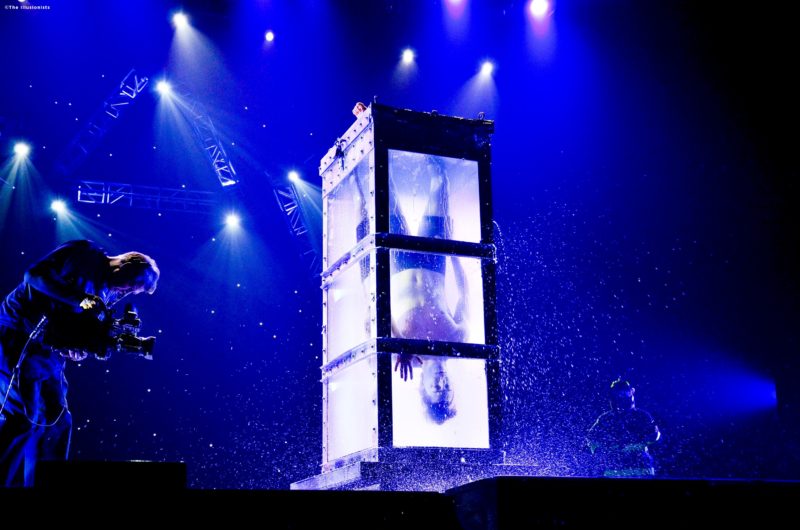 Andrew Basso, The Escapologist / Courtesy of Broadway in Cincinnati

The really impressive part is when he does it blindfolded and is only guided by the sound of a ringing bell.

Before the show, Goodwin mentioned that he has two assistants, but you don’t find out where the other assistant, Katie Jaime, is until later.

If you’re looking to be amazed and amused, The Illusionists show at The Aronoff is for you. Take your date because you’ll both be impressed.

If you’re looking for dinner options, there are several around the area. Click here for a review of The Aronoff to give you a better idea.

The Illusionists runs until Sunday, March 26. Check here for times. 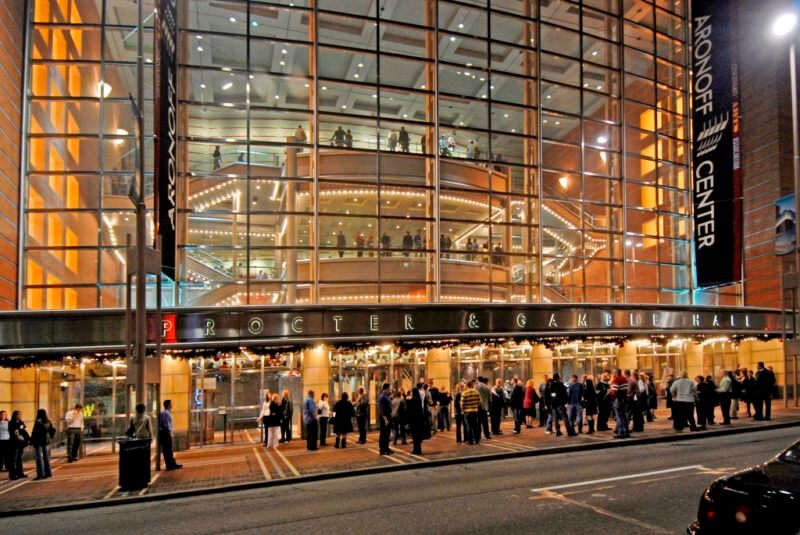 The Aronoff Center for the Arts / Courtesy of Broadway in Cincinnati